It is melodic, percussive harmonica that is rooted in blues tradition, but improvisational and open-minded. As Keith Dunn explains, “I play harmonica the way Hubert Sumlin plays guitar and Jimmy Rogers sings. I like to create beautiful sounds and paint a surrealistic picture with harmonica.” 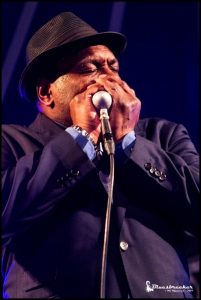 There was always music in the Dunn house including R&B station W-I-L-D and Arnie “Woo-Woo” Ginsberg. Listening to the two, you could hear every style. Keith’s musical diversity started then. T-Bone Walker performed at the baseball field where Keith played. At age 9, it was his first live blues. Keith bought his first Hohner harmonica when he was 12. He worked on the acoustic harmonica styles of both Sonny Boy Williamson I and II.

Soon afterwards, standing outside the Highland Tap, too young to get in, he listened to Luther “Snake” Johnson play. It was the first time that Keith heard a live Chicago-style blues band. “After hearing Luther, I was hooked on what was, at that time, the ‘new’ Chicago Blues sound. It was a mixture of Muddy Waters, classic R&B like Ivory Joe Hunter and funk like the music of James Brown or the Meters. It was a tough, funky sound.”

Keith began to play at parties and on the streets of Boston with his friend and harmonica guru, Stanley Steele a legend of the Boston Blues scene. “In our early teens, Stanley, started playing amplified and sounding like James Cotton. TONE! I loved that sound, so I saved money from an after school job and bought a 2 x 12 Silvertone Amp. I decided to leave Cotton to Stanley for the moment. I bought the ‘Hoodoo Man Blues’ album and worked on that Junior Wells sound.”

Stanley Steele arranged Keith’s debut with Roomful of Blues a few weeks before Keith’s 17th birthday. It was his first time in a real club playing and singing with a professional band. In addition to school work, Keith continued working on a variety of music and played these styles while in different bands around Boston including, blues, soul, jazz, swing, big-band, rock& roll and rockabilly.

In addition to his production work, Keith Dunn continues to perform around the world with his usual variety of projects and blues-oriented styles. Using his immense musical experience, Keith performs with the same joy, enthusiasm and deep commitment that he had from the very beginning. He is keeping the promise that he made to Muddy Waters. Keith Dunn is keeping the blues alive!